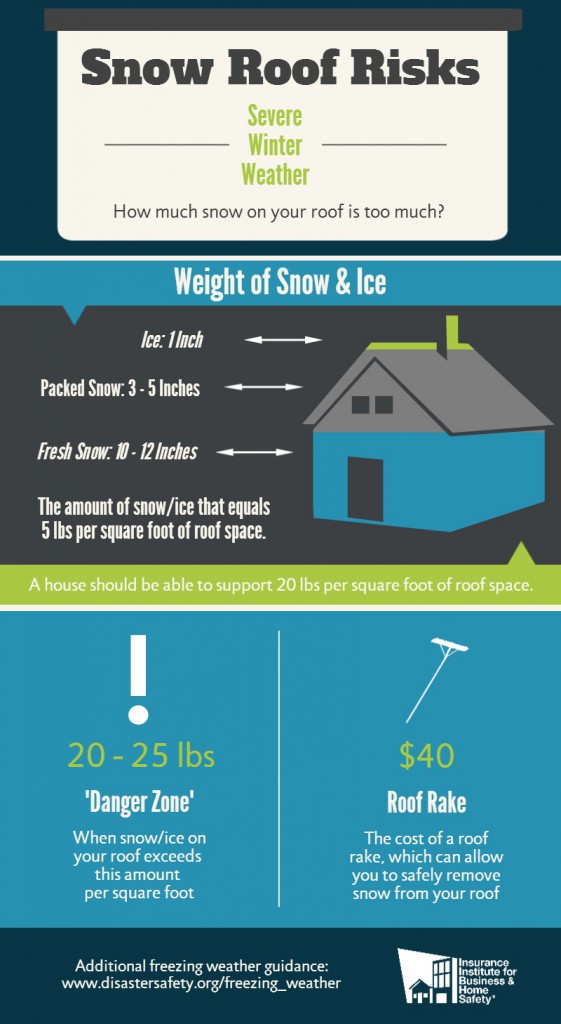 Guidance for understanding how much snow is too much for your roof to handle.

ESTIMATE HOW MUCH WEIGHT YOUR ROOF CAN SUPPORT

ESTIMATE HOW MUCH SNOW ON YOUR ROOF WEIGHS USING THESE GUIDELINES FROM THE INSURANCE INSTITUTE FOR BUSINESS & HOME SAFETY (IBHS):

Fresh snow: 10-12 in. of new (powdery) snow is equal to one inch of water, or about 5 lbs per square foot of roof space. So you could have up to 4 ft. of new snow before the roof should become stressed.

Packed snow: 3-5 in. of old (wet and/or packed) snow is equal to one inch of water, or about 5 lbs per square foot of roof space. So anything more than 2 ft. of old snow could be too much for your roof to handle.

Total accumulated weight: Two ft. of old snow + two ft. of new snow could weigh as much as 60 lbs per square foot of roof space, which is beyond the typical snow load capacity of most roofs.

Ice: One in. of ice equals one ft. of fresh snow.

SNOW REMOVAL MAY BE NECESSARY TO AVOID ROOF COLLAPSE

If the loads you’ve estimated based on the thickness of the various types of snow and ice exceed 20-25 lbs per square foot, you should consider removing snow from your roof.

For safe removal that won’t endanger you or damage your roof, use a snow rake with a long extension arm that will allow you to remove the snow while standing on the ground. If you are unable to safely do this on your own, it is recommended that you hire a licensed and experienced snow removal contractor.

Content provided by the Insurance Institute for Business & Home Safety